I met Kath Coory, CEO of BestLife, when she was looking to revamp BestLife’s website.  At the time I had resigned from my job at a marketing agency, but had not yet left, and Kasey and I had just started setting up Material Difference.

Kath started telling me about her beautiful daughter Lara and Kath's friend Tina and her son Tom and how BestLife began. Having worked with the charity Youngcare in the past, I knew exactly what Kath and Tina were wanting for their children and other children with disabilities – the opportunity to live their best life – a more independent life.

So at this stage we were crying and I was taking a brief for their website when we started talking about their fundraising initiative Heléna’s House. One of the main reason's for the new website was to facilitate fundraising.  We spoke about the importance of owning their own house as up until now their programs were done in rented properties. Having the security of having their own house to run their programs was so important.

Now you would think that’s the end of the story, but it is nowhere near the end.  Kath then proceeded to tell me the story of Helèna McIlwain – the namesake of Heléna’s House.  There were so many more tears.

Heléna McIlwain, a beloved member of the BestLife family passed away from a Pulmonary Embolism (DVT) aged only 19. Helena worked with BestLife and dreamed of becoming an Occupational Therapist. She wanted to make life better for young people with a disability. Her enthusiasm, passion, and sense of humour embody everything BestLife want Heléna’s House to become. It was very easy to see why they were naming the initiative after Heléna.

(Read more about Helena and her story here)

So I committed Material Difference to support them as our first charity fabric before Kath left the meeting – I called Kasey on my way home that night and told her what I had done – thankfully she agreed!

That was in January this year.

It’s taken a little while to get everything organised but we are finally here. The charity fabric Kasey designed is called Heléna’s Stars. She designed it about an hour after meeting with Kath over coffee and hearing first hand about who Heléna was and the impact she had on the BestLife community.

We have since met with Heléna's mum, Fiona and her sister Sophia. And it is an honour they have trusted us with designing a fabric that not only is the essence of Heléna but also brings hope to the disability community.

Helena’s House is the next chapter in the BestLife story. Their goal is to raise enough funds to build a place of their own, where teenagers and young people living with disabilities can take their important next steps toward a life of greater independence.

And we are so happy we can help by offering the proceeds of all sales of every metre of Helena’s Stars fabric to support this amazing initiative.

If you are a maker and would like to support the charity by using your talents to make products for Helena’s House to wholesale as fundraising products, please get in touch with us and we will connect you to the BestLife team.

More information about Helèna’s House including how to donate to the project is available on their Facebook page and the BestLife website . 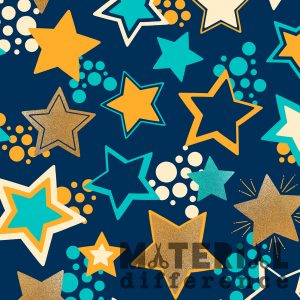 ‘Helèna loved stars’. Her sister Sophia says it started out as a fashion trend – she wanted stars on dresses, on shirts, on skirts – but soon enough, everything she owned needed to have a star on it. As her mum, artist and educator Fiona McIlwain says, stars were “her thing”.

Embracing Heléna’s love of stars, this classic yet fun pattern incorporates both the colours of the Helena’s House logo and the star symbol.  Each star in the design is uniquely different, to represent the many individuals who have been touched by Heléna and her story.  The largest star (bottom left corner) represents Helena while the shining star is a symbol of her star in the sky.  A symbol bringing hope to the disability community.  The navy background is a nod to the night sky and allows the pattern and colours to be the real ‘stars’ of the show.

To purchase the Heléna’s Stars fabric head to the shop.